THIS INFORMATION IS NOT UP TO DATE - PLEASE CHECK THE POST OF JULY 1, 2010!!
The IC-7000 is a very popular rig, and rightly so, since it combines many desirable features in a small, light transceiver. I was surprised when some of my friends reported that their rigs had literally gone up in smoke! Actually, one of them had died TWICE with the same symptoms (scorched driver unit). Later I found out that this phenomenon had also been reported by other users on the Internet. The whole thing reminded me of my experience with my FT-817 (which, by the way, still goes on strong after much the same treatment).
As I undertook to fix my friends' rigs, I decided to implement the same self-oscillation preventive measures to their IC-7000s, as the failure mode had a strong resemblance to that of my FT-817 final amplifier.
The problem probably lies with self-oscillation of the common driver stage of the TX amplifier chain. A series resistance of a few ohms is placed in series with the input (gate) of the FET amplifier, by cutting the appropriate PCB trace. The photos and schematic explain the modification. It is very simple to do, and can help prevent this "smoking" failure mode, without any side-effects and at negligible cost. 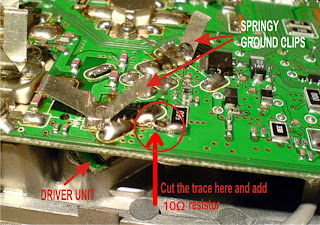 (click on the photo to enlarge)
THEORY OF OPERATION: This mod lowers the Q of the copper trace circuits feeding the driver amplifier's input, therefore quenching any tendency of the stage to self-oscillate at some VHF frequency, with destructive results.
IMPLEMENTATION: After removing the covers, locate the driver unit's input trace (see photo), cut it carefully and scrape the solder resistant enamel to expose the copper surface. Then, solder an 10 Ohm SMD resistor across the cut of the PCB. That's all! 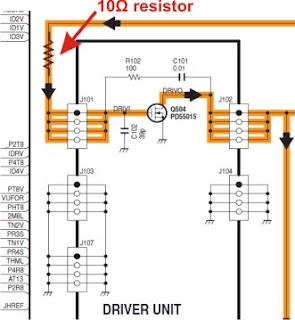 IMPORTANT: After you have finished, carefully check and clean all of the springy ground clips on the PCB. Also, clean carefully and apply a thin protective film of grease or vaseline to the points on the covers where the grounding clips of the PCB make contact. The deterioration of this grounding scheme due to oxidation of the inside surface of the covers has been proposed as a possible reason for the driver unit self-oscillation and destruction.

RESULTS: I performed the mod in December 2009. Both the affected rigs have been heavily used after the mod, without any more problems.
If your IC-7000 hasn't suffered from this failure yet, this mod ensures that the possibility of destructive self-oscillation of the driver stage is significantly lowered.

This mod has also been posted at www.mods.dk.
Good luck and enjoy using your IC-7000 on the air!