Some more mods for the IC-7000 amplifier chain 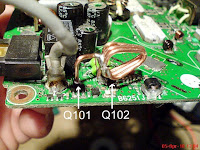 During the efforts to cure the self-destructive tendencies of the DRIVER unit of the IC-7000, I noticed that the pre-driver transistor, Q102 (RD01MUS1), which also works in class-A, gets too hot to touch (the dependable index finger test never fails - although my "probe" seems to suffer a bit with each test!). The copper surface around the transistor  serves as a heat sink, but it's obviously not enough. Elevated temperatures almost certainly lead to serious problems with semiconductors in the long run, so I decided to add an improvised heat sink to both the pre-driver and the pre-pre-driver Q101, 2SK2854. The photo tells the story (click to ENLARGE): A small heat sink is made with a piece of solid copper wire (of 1.5 mm diameter) and then soldered to the (grounded) source tabs of Q101 and Q102. Just make sure the heat sink doesn't touch anything when you put the PCB back in its place. The transistor operates without losing its cool now. One could even  slightly lower the idle current of the pre-driver Q102, by paralleling R112 (3.9 kΩ) with another resistor of suitable value (around 10 kΩ or so), but I haven't done that, as the transistor operates at a quite acceptable temperature with the new heat sink. The next photo shows how the new heat sink fits into the available space. Be careful! Accidents can cause much woe...

Good luck and take care (and your time)  in performing the mod!
Posted by SV8YM at 8:59 PM