A few months ago, a friend gave me his TS-2000 to check, because occasionally there was a crackling noise coming out of the speaker (and showing on the S-meter) during SSB weak signal reception (SW8KOU operates EME on 2m).
However, when I checked the rig, the noise just wasn't there. I checked for bad SMD components or soldering, but found nothing. I returned it, the noise eventually came back even louder after a few days, he gave it back to me to check it again, and guess what - the noise was absent again. I gave it back to him again, and he reported there were sporadic outbursts of noise now and then.
Eventually, the noise came back to stay, and loud it was!! It resembled lightning noise, heard during a storm on a low HF band and registered S2 ~ S5 on the S-meter. This time the noise was kind enough to be there when I powered the rig up on the test bench. It could be heard on SSB only, not on FM (with the proper test setup). I had already previously checked the rig thoroughly for bad SMD components or bad solder connections, and, having seen many "withered" ceramic filters in the meantime (in other rigs), it suddenly dawned on me that the noise could very well be emanating from a faulty ceramic filter! The schematic diagrams showed two such filters in the SSB signal's path, CF3 and CF4 in the TX-RX unit. 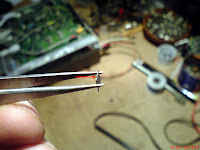 To make a long story short, the culprit was CF4. The filter had suffered the same degradation I describe in another post, but in a more gradual way, due to different conditions. The other cases I have examined had about 7V applied to the filter's pins, but the circuit around CF4 applied about only 1.5V to it. The degradation was there, but the symptoms and time scales were different. I measured about 1MΩ from the output pin to the nearest ground pin, which was far more resistance than the usual 20 ~ 100 Ω I had previously measured in other malfunctioning filters. That explained the crackling noise and the fact that the receiver didn't go totally deaf, like in the other cases. The lower voltage was slower to act on the filter, and the degradation was milder. I opened up the filter, and, there you are, I could immediately see the effects of oxidation on the phosphor bronze spring plate. I removed the thin element at the output side, and sure enough, it showed the telltale signs clearly (see the photo, click on it to enlarge). After carefully cleaning the edges in the way I have described, the resistance reading was more than 40ΜΩ. I soldered the filter back in place, and the noise was gone. My friend tells me that the receiver is very quiet now (but let's see what happens when eventually CF3 (with 7V applied to it) breaks down, too!).
I will shortly publish the solution to this vexing problem, consisting of just adding two DC-blocking capacitors at each filter (the example mod will be performed in an ailing TM-D710). The same simple concept, however, holds for the modification of all similarly affected rigs.
Posted by SV8YM at 5:14 PM