The Mysterious Case of the Withering Filters

The ceramic filters found in almost all  radio communications equipment are indeed extremely useful components. Small, cheap and efficient, those "little black boxes" have found widespread use by all the manufacturers. I used to think that they're almost indestructible, because I had never seen one of them fail - but this fact has changed.
I have recently come across several cases of VHF-UHF transceivers where the receiver suddenly went deaf, faintly hearing signals only above -60dBm. The culprit was the ceramic 2nd IF filter (450 or 455 kHz) in all those cases. All those filters I have examined showed the same symptoms: the output side showed a low (a few tens of ohms) resistance to ground for DC, where it should have been almost infinite resistance.
After a while (and having replaced several such filters in my friends' transceivers), I became curious and investigated the reasons why those fairly robust components had become bad. 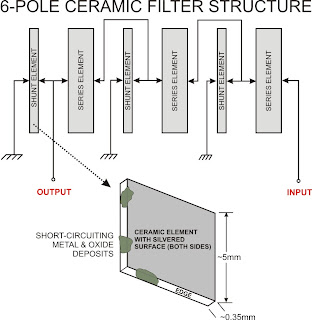 First, let's talk a bit about their structure (see the diagram I made, click on it to enlarge). Most of the 6-pole ceramic filters used in amateur radio transceivers have the general structure shown on the left. There are six ceramic (barium titanate, if memory serves) resonator elements, three in series and three shunt, connected as shown. The series elements are thick, the shunt elements are thin, and both have their wide surfaces plated with a metal (I guess it's a silver alloy). The narrow edge surfaces are not plated.
There are metal inserts between the ceramic elements, making contact to the plated surfaces of the elements and providing the electrical connections to the outside world. The whole structure is housed in a small plastic case, which is hermetically sealed with epoxy resin at the bottom side, where the pins come out. 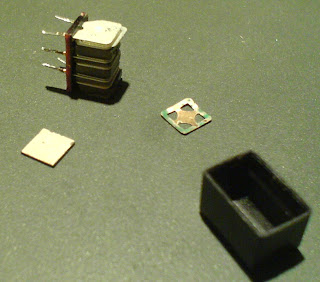 So, what was the problem? While waiting for a replacement filter for a rig, I decided to try to pry open the case of the failed filter. I did so with the edge of a very sharp X-acto cutter, and I carefully removed the black case. One of the ceramic resonators fell off, along with a (phosphor bronze?) tensioner spring plate, which keeps everything pressed together when the filter is in its case.
It was immediately evident that something was wrong, because the spring plate was visibly oxidised, and there were suspicious looking spots at the edges of the thin ceramic element (you may notice one of them just below the right corner). I measured with my ohmmeter and saw that that element was the bad one, because the resistance reading was 19 ohms, the same value I had previously measured between the output pin and ground. If you take a good look at the next macro photo, you will see that the corners of the other elements also have low-resistance deposited paths short-circuiting the elements in the same way (also, look at the lower part of the diagram). To my surprise, with a magnifying glass I observed tiny droplets of a clear liquid (water, I think) at the inside walls of the case! What was the story here? 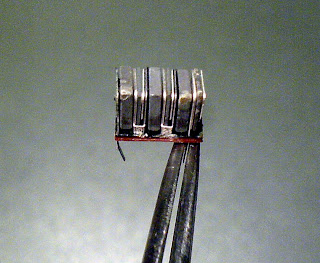 Hello, electromigration! The "crime scene" had all the necessary elements required for electromigration to do its nasty stuff. But let's take things in order.
a) Ceramic filter manufacturers (ALL of them!) expressly warn against applying a DC voltage at the input and output pins of the filters. Why? The reason is electromigration!
b) Electromigration is a process where, under the influence of an electric field and in the slightest presence of moisture, metal (especially silver) starts migrating and forming conductive paths (called dendrites, from their tree-like appearance, δένδρον [dendron] in Greek) across insulating materials. This phenomenon is a major headache e.g. for IC manufacturers, significantly lowering the reliability of their products.
c) The final result in our case is that (especially across the thin ceramic element edges) conductive paths of metal (and oxides from the electrolytic process since moisture exists inside the filter) are formed, short-circuiting it. Good-bye, filter?

Don't fret, there is still hope! (if you're good at handling very small parts - that's the catch). I thought that if I could get the elements out of the structure one by one and clean their edges, thus eliminating the conductive path, perhaps the filter would work again. That's very easy, because they aren't soldered in place, they just get "clamped" between pairs of contacts when the filter case is in place. If you decide to do that, only get ONE element out at a time with a pair of needle-nose tweezers, clean all of its its narrow edges by wiping them lightly across very fine grit sandpaper a couple of times and then replace it exactly where and how it was - don't mix them up! Also, don't touch the resonator elements with your hands, finger oils will contaminate them and possibly change their resonant frequency! Carefully clean oxidation wherever you can spot it by scraping, always being careful not to spill the guts of the filter! If you do spill them, they can be put back in place IF you have taken notes and photos of the filter's structure. I cleaned and dried the interior of the case, too. Before putting each resonator back in its place, check with your ohm-meter, you should get an infinite resistance reading - anything else indicates you need to repeat the cleaning process - gently!
Finally, I put the filter back together, sealed it with a minute quantity of cyanoacrylate and soldered it back in the transceiver. Lo and behold, the receiver sprang back to life - and at full specified sensitivity, as my measurements showed. The pass-band response hasn't changed. I think that now, after my delicate sandpaper treatment, the filter is a lot less possible to again fall victim to the nasty electromigration, because all the edges are quite clean now, there isn't any metal there any more.Time will show!

The final word: Ceramic filter manufacturers are quite right in warning against applying DC voltages at the input / output pins of the filters. They specify the use of a DC blocking capacitor at the filter's input and especially the output. Application of DC voltage causes electromigration and corrosion to initiate (especially in humid environments where temperature variations eventually promote water vapor condensation inside the filter, which may have imperfect sealing), and after a period of time the filter fails in the way we discussed.

The funny thing is, most of the manufacturers of amateur radio (and commercial) transceivers amazingly and inexplicably DON'T use the blocking capacitors, instead they boldly apply DC potentials directly at the filter's pins. A survey of several schematic diagrams confirmed this, especially in transceivers where there are several ceramic filters switched in and out of the signal path with diodes  and DC bias (usually about 8V). Why they do so beats me, perhaps it is to save some cents for a pair of blocking capacitors for each filter, creating a huge reliability problem on the way...

The enterprising radio amateur can always add those capacitors in the circuit (0.1 μF, 50V, 0603 size SMD ceramic capacitors are great) and save her / his receiver from becoming deaf due to a ...withering filter! Admittedly, this is a bit difficult in most modern rigs, due mainly to the small dimensions of the components and layout... but it's certainly worth a try.

***ADDENDUM: For those who want to learn more about the phenomenon that I propose that causes DC-biased filter failure, please take a look here: http://www.ami.ac.uk/courses/topics/0158_emgr/index.html
There you can admire two great photos of the results of electromigration across tracks and solder resist on printed circuit boards, plus lots of interesting relevant information. Clearly, humidity and voltage gradients at small distances are a bad combination!!

Good ceramic filter reviving to all of you!!