Well, that's what they call a "bird's eye view", I guess! If you want to enjoy a great aerial view from the top of Skopos mountain in Zakynthos, a place that a lot of nice antennas call "home", use the link http://youtu.be/0Z1mXfpahfg (use "full screen"!). Mike, SV8KOM used his professional, high-tech, hex-rotor remotely controlled helicopter to record this video (and many others!). This is from where Stigma Radio 97.6 and Island FM 88.6  (in English) transmit their programs to the island and beyond! This is also the site of SV8S D-Star repeater (its antenna is located on the shorter mast, on the right of the one yours truly can be seen perched up on with his tools and stuff). It was a superb day to work on antennas! Oh, and I reeeeeally envy those birds!!

Smoking is a no-no for your rig, too! 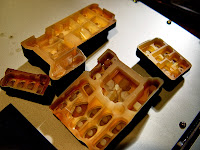 The photo (click to enlarge) shows the rather obvious effects of cigarette smoke on the keyboard membranes of a Kenwood TS-2000. The owner complained that the backlighting had gone very weak, so he suspected a circuit malfunction. Alas, his heavy smoking was the sole culprit.
The membrane soft plastic is normally semi-translucent whitish - not so after having been exposed to cigarette smoke for a while. It turned brown - and the worst part is, that this brown colouring is permanent! Obviously the stain gets into the plastic! This brown colouring acts as a filter for the green backlight, attenuating it greatly, to the point that it can be barely seen in complete darkness only. I have seen (and smelled!!) many rigs owned by smokers, it's definitely causing them serious cosmetic - and functional -  harm.
So, if you are a smoker, just imagine what kind of stuff the smoke is leaving behind in your poor lungs - perhaps quitting is the best option, both for you and your beloved rigs!
Posted by SV8YM at 2:21 PM

You may have spotted a clue or two in this blog that I get most of my kicks from electronics and telecommunications. Nevertheless, having studied Biology at the University (fascinating science too), I frequently stop to admire the great work of Nature in all its diversity. 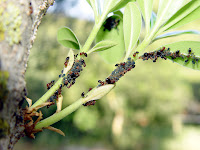 The other day I observed  what you can see in the photo (click on it to enlarge). The ants are seen "milking" the small dark-green aphids to get their honeydew (which they seem to greatly appreciate). The ants use their antennae to stimulate the aphids for this. They protect them from other insects that prey on them. This is called a "mutualistic relationship".

Now, you may wonder why I, being a radio amateur, like ants and other bugs. Easy: They use antennae, too!
Posted by SV8YM at 10:04 AM