Addendum - The leaking Electrolytic Capacitor Plague and my TDS-460 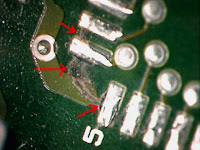 The nagging thought that maybe, just maybe, there was more electrolyte hidden under one of the SMD ICs on the board gradually rose to an obsession. I had to see with my own eyes!
So I proceeded to remove U82, one of the ICs that had been affected, to take a look under the hood.The photo (click to enlarge) shows I had missed a spot, or rather three spots, where the electrolyte could potentially create trouble.
Fortunately, there weren't any signs of the electrolyte under the IC. The row of pins and soldered connections at the sides act somewhat as a barrier, and had prevented the electrolyte from creeping under the IC, holding it among the pins by affinity. Unfortunately, the electrolyte doesn't mind and does its frightful tricks there, too. There is no conformal coating immediately around the copper pads where the pins get soldered, and this facilitates the electrolyte getting under the coating exactly where it upsets things the most, creating parasitic conductance where there shouldn't be any. Scraping off and cleaning with IPA does the trick, a good measure of drying with hot air from an SMD soldering station and coating with a small quantity of acrylic varnish, applied with the tip of a fine painting brush (after the IC is back in place) ensures the best possible result.


And a word to the wise: Searching for information on the Web, I have seen that a lot of  fellows have had the same unpleasant experience with the Plague. In several fora it was recommended that the affected board should be washed under the tap with water. I am quite skeptical about that though, because the water could easily dissolve the dried-up residue of the electrolyte, which would then merrily wick itself deeper into the board wherever there isn't any conformal coating (immediately around the ICs pins, for example). Getting it out in that case might prove next to impossible.
When capacitor electrolyte contamination is the issue, removing it only at the affected spots by thoroughly scraping the residue and already damaged coating off the board (before applying any liquids), then thoroughly cleaning just that spot with a cotton swab soaked in isopropyl alcohol (IPA)  logically seems much safer. After drying with hot air (at about 140 degrees centigrade applied locally for about 5 - 10 minutes), one can seal the spot with acrylic varnish, removing the possibility of future moisture ingress.
A hasty cleaning action with the wrong means or method might make things a lot worse, so beware..!
Posted by SV8YM at 10:29 AM